Skip to content
Home › Introducing Satu Jääskeläinen, Professor of Clinical Neurophysiology and Director of the Division of Medical Imaging 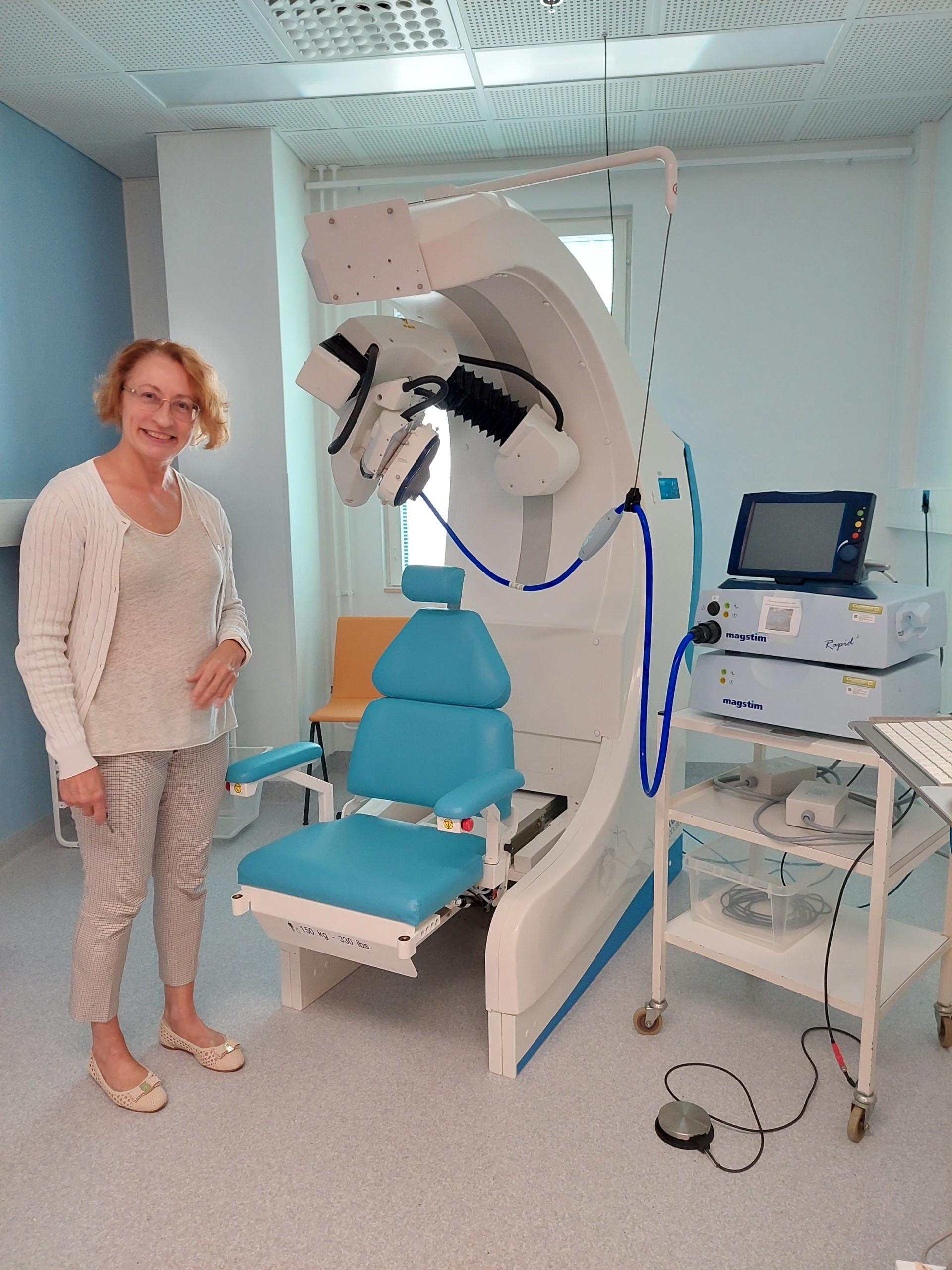 Clinical Neurophysiology as an Aid in Pain Diagnosis and Treatment

Becoming a doctor was Satu’s dream already in high school, although towards the end she also became interested in a career in architecture.

“In the 80s, neurology was more about solving riddles and diagnostics, but the means of treatment were lacking. There were no fancy treatments for MS, no stroke thrombolysis treatment yet. At the clinical neurophysiology department, on the other hand, I was able to make diagnostics much more precisely and I was able to go deeper and with better precision than with a clinical examination.”

Research was an essential part of the young specialist’s work right at the beginning of her career. At that time, research was an integral part of the profile of clinical neurophysiology, and most of the doctors did dissertations and research in addition to clinical work. Under the guidance of Professor Heikki Lang, Satu first started studying brainstem reflexes in children and neonates, and became more interested in cranial nerve diagnostics. At this point, she joined the pain work group and began to collaborate with oral surgeons in the diagnosis and treatment of mandibular sensory nerve damage.

“Oral surgeons were wondering about the nerve damage that occurs in connection with jaw surgeries. Sensory nerve damage in the lower jaw often occurred after surgeries, and there were no methods for diagnosing them.”

The subject of her dissertation took shape based on this clinical challenge, and as part of her work, Satu developed a new method for sensory neurography (i.e., the measurement of sensory nerves) that could be used to measure the function of the lower jaw’s sensory nerve. She also studied the neurophysiology of the eye blink reflex and the use of the measurement in the diagnostics of trigeminal nerve injury. In 1995, Satu completed her doctorate in medicine.

Groundbreaking work has been done in Turku regarding the diagnosis and treatment of burning mouth syndrome. Burning mouth syndrome occurs in up to 10-15% of postmenopausal women; perhaps because the levels of neuroprotective hormones derived from estrogen decrease in the body.

“Burning mouth syndrome (BMS) has been a very interesting research topic. My first BMS patient was a woman who suffered from unilateral burning mouth syndrome. At this point, I had collected reference values for habituation of the blink reflex and noticed that the patient in question completely lacked habituation of the reflex on the side of the lingual pain symptoms.”

It appeared that brainstem regulation was disrupted in the same way in patients with burning mouth syndrome as in early Parkinson’s disease. In collaboration with researchers at the Turku PET Center, Satu made a discovery showing that in some patients, the burning mouth syndrome is caused by a disorder of the basal ganglia of the central nervous system, which is accompanied by a reduced concentration of dopamine in the corpus striatum. A central nervous system disorder in the dopamine system may therefore expose patients to chronic pain in addition to motor symptoms.

After the central nervous system findings, Satu and her research group continued sensory nerve studies in patients with orofacial pain, and the studies showed that burning mouth syndrome was also associated with small fiber neuropathy of the oral mucous membranes. As a result of the research, a clinical classification was created that divides burning mouth syndrome into three subgroups: 1. disorder of the basal ganglia of the central nervous system (resembling central pain), 2. trigeminal neuropathic pain due to nerve injury following e.g., a dental procedure, and 3. localized small fiber neuropathy of the intraoral mucosa. The most common of these is localized small fiber neuropathy, i.e., it was found that the intraoral burning pain really was neuropathic in nature.

An accurate classification of the causes of pain is a prerequisite for selecting the right treatment and focusing it better than before. Therapeutic neuromodulation, e.g. repetitive transcranial magnetic stimulation (rTMS) works best for neuropathic pain, and also for patients with burning mouth syndrome.

In 2006, the Turku Cognitive Neuroscience Research Center acquired the first navigated rTMS equipment, i.e., non-invasive magnetic stimulation equipment for brain stimulation. This equipment intended for research use has created the basis for high-level neuromodulation research in Turku, and accelerated the introduction of the method into clinical practice. Turku University Hospital has been one of the first hospitals worldwide to adopt rTMS treatment for clinical use. The multidisciplinary neuromodulation treatment group at the Turku University Central Hospital, led by Satu, has had the Center of Excellence status since 2018.

rTMS treatment was introduced in Turku University Hospital to treat depression in 2010, and the following year treatments for neuropathic pain began. Pain is the most common complaint, for which we go to the doctor. However, most patients suffering from chronic pain do not get help from current drugs, so neuromodulation treatments are an important additional help.

“A large proportion of nerve damage pain patients, 50-60%, who have not benefited from any previous treatment, benefit from rTMS treatment. We currently have an 8-month queue for TMS treatments that are given with two devices in morning and evening shifts.”

With clinical studies, the level of evidence for the effectiveness of rTMS treatment for depression and neuropathic pain is now already class A. rTMS also works well as a combination therapy, for example, in patients who suffer from both pain and depression. The treatment is particularly useful in these cases because neuromodulation therapy, which is partly based on neuroplastic changes in the central nervous system, seems to be a particularly effective form of treatment in people prone to comorbidities.

Development of the clinical neurophysiology specialty

“Clinical neurophysiology is a growing field: our service volumes, the number of personnel and the size of the premises have more than doubled in ten years and our budget has grown considerably. Our services are needed, and we cooperate with different clinics more and more.”

“The brain should also be monitored when the patient is in the ICU. It is not enough that the heart and lungs are working. Rehabilitation after intensive care depends on the neurological situation. If status epilepticus has not been treated in time, the prognosis is poor. In principle, with the clinical neurophysiology, you can predict who will recover and who will not, based on neurophysiological recordings done during the first 24 – 48 hours in the ICU.”

Satu is a prolific researcher and collaborates a lot regionally, nationally and internationally. In recent years, Satu and her research group have studied genetic risk factors predisposing to neuropathic pain and the genetics of the dopamine system in collaboration with Professor of Pharmacology and Drug Development Ullamari Pesonen. In their research, they have found that the genetic polymorphism that regulates the function of the dopamine system, DRD2 957C>T, influences the efficacy of rTMS for pain. The same polymorphism also seems to predispose to chronic neuropathic pain, and affect the perceived intensity of pain, e.g., in burning mouth syndrome.

The recently completed two-center study with Helsinki University Hospital regarding CRPS pain (i.e., complex regional pain syndrome) is in the analysis phase. In the study, the pathophysiology, genetics, proteomics, metabolomics, and the role of the glymphatic system of the brain in the syndrome have been investigated, and a new rTMS treatment target discovered in previous Turku University Hospital studies in the area of the parietal operculum on the right has been tested.

Satu is also involved in a study, the purpose of which is to compare the diagnostic accuracy of clinical examination, clinical neurophysiological examinations and structural imaging in the differential diagnosis of back pain patients. The project is very important in terms of public health, in order to be able to distinguish neuropathic pain from pain caused by the musculoskeletal system, and to target treatment correctly at an early stage.

The latest research article published as a result of international cooperation can be found in the prestigious magazine PAIN (DOI: 10.1097/j.pain.0000000000002617). Satu was involved in a collaborative project between the University of Bath, the University of London and Orion Pharma, which investigated the effectiveness of the activating virtual reality (VR) therapy developed by the research group and based on behavioral therapy and gradually increasing physical exercise in chronic back pain patients. Compared to the placebo group, in the VR therapy group the fear of movement disappeared and the patient’s mobility improved significantly.

Satu is a researcher who doesn’t want to stay in her own box, instead she emphasizes the role of cooperation and open discussion. She recognizes the challenge of doing small projects locally in Finland. Already in the planning phase of the project, it would be important to involve widely different researchers. Although she admits the challenges of multicenter studies, gathering large data is still worth all the effort.

“Expertise in multicenter research should be improved at the national level. For example, how data storage can be handled homogeneously in projects. Neurocenter Finland could offer the possibility of cooperation so that datasets larger than before could be collected.”

“Together we are bigger, and we can accomplish something more significant!”