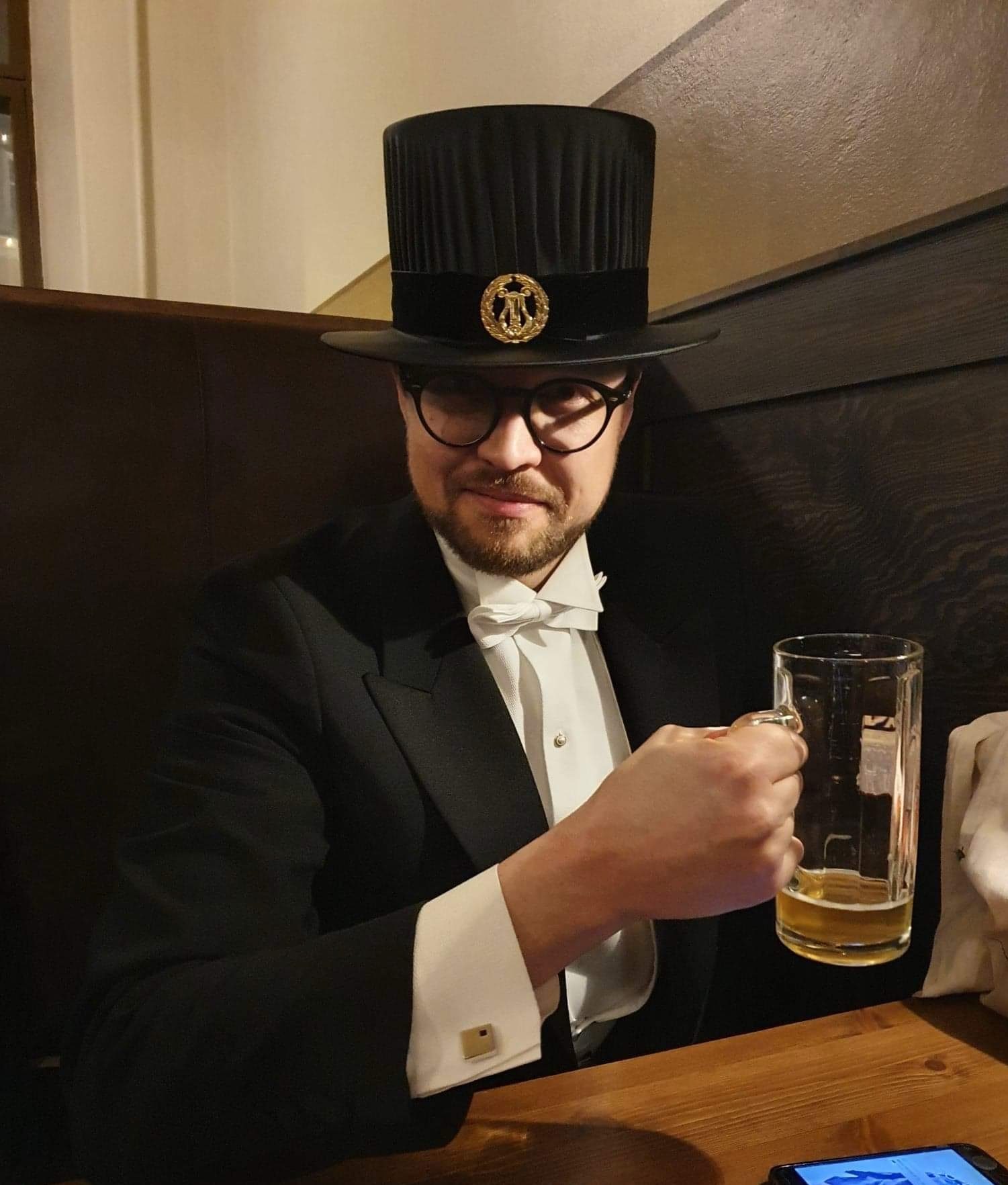 Assistant Professor Henry Railo is an experienced researcher in the neural correlates of consciousness with a background in psychology. He is currently an Assistant Professor in the Department of Psychology and Speech-Language Pathology at the University of Turku and will start his new project on speech deficits in Parkinson’s disease. His research will utilize electroencephalography (EEG), psychophysical methods, and a randomized controlled trial to understand how patients perceive their voices and if voice therapy improves the patients’ speech.

Starting from a Psychological Background

Henry comes from a psychological background where he obtained his undergraduate and graduate degrees from the department of psychology at the University of Turku. He first became interested in studying psychology when he was in high school. It was the first topic to catch his eyes and pique his curiosity more than others.

“Psychology was the only subject I found fascinating in high school. Before that, none of the basic subjects like math, physics, biology, and chemistry caught my attention. But when I took psychology, I was immediately attracted because the teacher was supportive, and the topics were interesting. I excelled in it, so I decided to apply for the school of psychology.”

Throughout his studies, Henry has found himself particularly interested in philosophical questions related to consciousness. The connection between the brain and consciousness is a complex and widely debated topic in psychology and neuroscience. While it is known that consciousness arises from brain activity, specifically the activity of neural networks, the specific process by which this happens and how physical activity in the brain creates subjective experiences is not understood.

“The question of how the physical brain can create consciousness has always captivated me. The brain is made of physical material, and our consciousness doesn’t seem anything like that because it’s somehow qualitative. How the brain makes us consciously see, for example, feel or hear is still an ambiguous topic in neuroscience research. Therefore, understanding the relationship between the brain and consciousness is crucial in understanding the human experience.”

Henry was inspired by the work of Professor Antti Revonsuo , who later became his PhD supervisor along with Professor Mika Koivisto to study the neural mechanisms of conscious and unconscious visual perception. After acquiring his PhD in 2013, Henry decided to take on a postdoctoral position in the department of clinical neurophysiology. One of the topics of study was eye movements in Parkinson’s disease, a Collaboration with Professor Valtteri Kaasinen .

“After my PhD, I was motivated to transition my focus from basic science research to something more clinical with more applicability and related to real-life patients. Therefore, I studied the visual perception of Parkinson’s patients and how the disease affects them in a way that can impact their daily lives.”

“At that time, I studied action-perception integration in patients with Parkinson’s disease. I was interested to learn how these patients perceive and make their own actions compared to healthy people. However, the use of eye tracking to answer these questions proved to be difficult.”

With his readings on Parkinson’s disease and its symptoms, Henry became interested in speech deficits. Moreover, he was recently appointed as an Assistant Professor at the Speech-Language Pathology unit of the department, where he will continue working on this topic.

Henry began his career in research focusing on the neural correlates of both conscious and unconscious perception, specifically regarding how many people unconsciously use their visual information to control their behavior. In one of his research projects, he attempted to mimic the effects of blindsight, a condition in which individuals can perceive visual information without conscious awareness, in healthy humans using transcranial magnetic stimulation (TMS).

“People rely on their conscious visual perception to guide their behavior much more than it is usually assumed.”

In addition to his work on blindsight, Henry continued the research of Professors Antti Revonsuo and Mika Koivisto, who had previously uncovered a correlate of conscious vision known as visual awareness negativity. They studied this effect further using EEG (eg, Neuroscience of Consciousness. 2015 July 30;2015(1):1-12. Doi: 10.1093/nc/niv004 ).

The Consciousness of Fear

During his work in consciousness, Henry started a research project to study how people respond to fearful stimuli. For example, the fear of snakes and spiders is a common phenomenon among humans. Evolutionary theories suggest that this fear developed as a survival mechanism in early primates, such as small monkeys, as snakes were their primary predators. This led to the development of a brain capacity for automatically—and perhaps unconsciously—detecting snakes, which enabled the Primates to withdraw from them and avoid being eaten. Today, this fear module is still present in humans, and many people continue to experience the fear of snakes and spiders.

“In this project, I wanted to investigate if humans withdraw automatically from threatening animals such as snakes and spiders. Furthermore, I wanted to use an experimental paradigm that is as close as possible to real-life withdrawal. So, I decided to examine arm movements instead of relying on button press reaction time measures as is classically done in Cognitive psychology.”

The results of this study have been intriguing. It was found that people do indeed withdraw faster from snakes and spiders compared to other animals, such as butterflies or birds. However, this only happened when people had to withdraw their hands, compared to when they had to approach the stimulus with their hands or press a button.

These findings suggest that to understand the fear response to snakes and spiders truly, it is crucial to use ecologically valid and realistic movements instead of relying solely on button press reactions, which are common in Cognitive Psychology studies.

A New Beginning in Speech-Language Pathology

Henry is now interested in studying speech production and common speech deficits in Parkinson’s patients. Hypophonia is one of the common deficits experienced by patients, and it is characterized by a reduction in speech volume leading to difficulty in communication. Additionally, speech deficits significantly impact the patients and their quality of life as they can cause social isolation due to limiting communication with other people. This isolation will affect their relationships with their families and friends, which could lead to depression and other problems.

“Parkinson’s patients usually have speech deficits, of which hypophonia is one of the most prevalent. As a result, patients are found to speak at a lower volume intensity than normal. However, if you ask the patients, they perceive their voices to be even louder than usual. Therefore, I became fascinated by this dissociation between what the patients consciously feel and how they actually behave.”

In this project, Henry aims to combine his experience in consciousness research with clinical application, which is essential for advancing scientific understanding of consciousness and improving treatment options for patients through speech and voice therapy.

“It can be difficult for patients to change their speech patterns if they do not clearly understand how they speak. Therefore, we will study speech consciousness in the patients using psychophysical methods, including behavioral testing and EEG. It will also involve clinical intervention through voice therapy.”

“I am also interested to understand how patients will benefit from the therapy and how we can improve their outcomes. In the future, we plan to include brain stimulation techniques combined with voice therapy to enhance the treatment results.”

Throughout his research career, Henry worked with many researchers on different projects. One recent publication involved a collaboration with Professor Tapio Pahikkala and Assistant Professor Antti Airola. They tried to classify which individuals have Parkinson’s disease using resting state EEG. (IEEE Journal of Biomedical and Health Informatics. 2023 January 09:1-9 DOI: 10.1109/JBHI.2023.3235040).

“Our goal in the study was to classify Parkinson’s patients from controls using EEG data. Specifically, we wanted to see how accurately we could do this with as few electrodes as possible. It turns out that we were able to achieve accuracy rates of around 75-80% with just 5 electrodes. This is significant because it means you don’t need many electrodes to classify Parkinson’s patients.”

Although the previous studies often report an accuracy of over 90%, they had only small sample sizes compared to this study which had around 150 participants.

With his new project in studying speech deficits, Henry aims to collaborate with more specialists and neurologists to better understand speech deficits.

“In the future, we could also study other neurological diseases, in which speech deficits are among the common symptoms.”

From Research to Rock

In addition to his work as an Assistant Professor and researcher, Henry is also a musician. He is a member of a Finnish band called “ Kosmomen ,” in which he plays guitar as his main instrument. He has performed alongside the other band members at different events playing blues and rock music, and the band is currently finalizing their new recordings, which will be published soon.

“Outside of academia, I spend my time, for example, playing and listening to music. I have mainly played guitar since the early beginnings of my musical journey, but I have recently also started to learn piano.”