Skip to content
Home › Introducing Jarmo Hietala, Head of the Psychiatry Department and Professor of Psychiatry 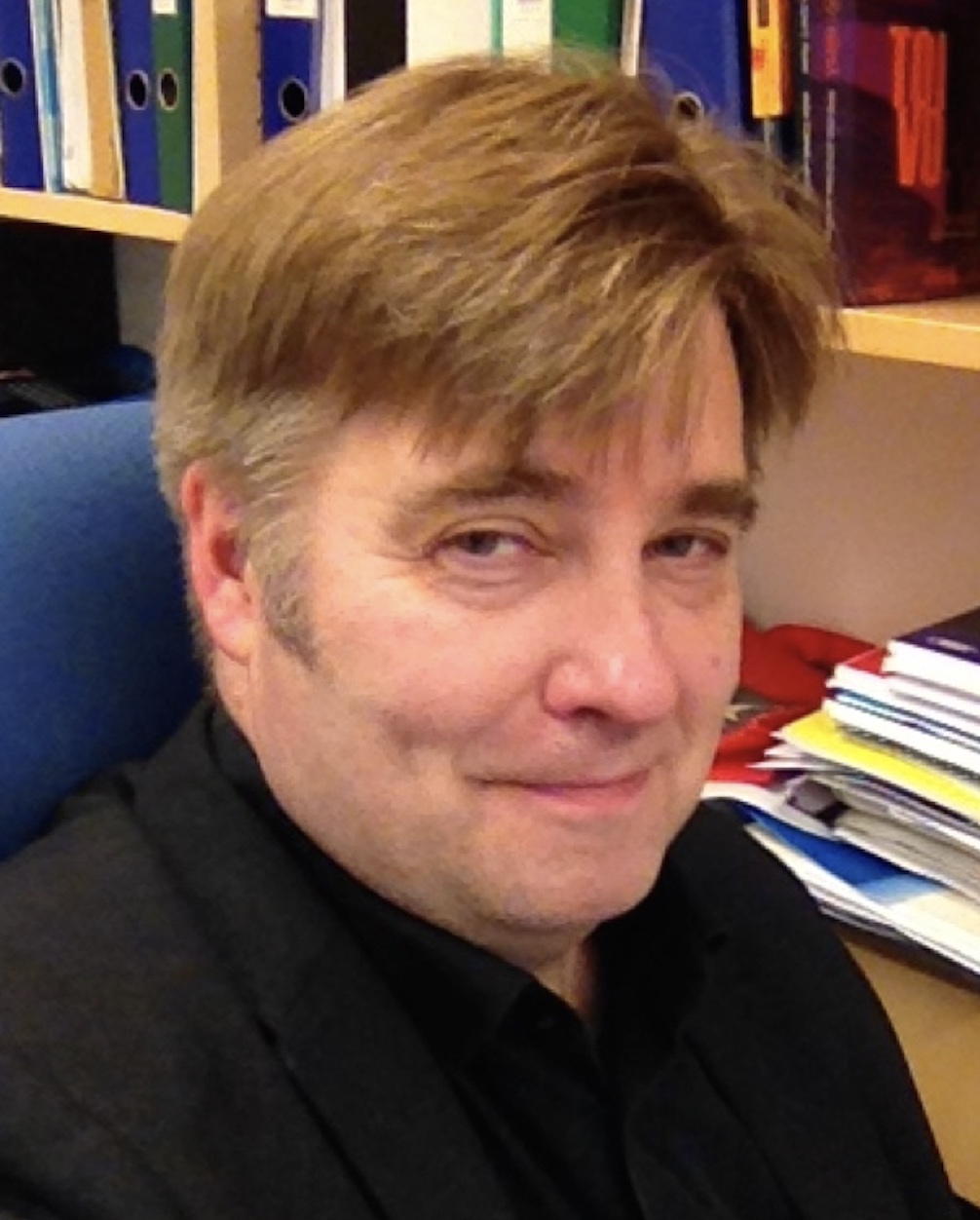 Extensive Career from Pharmacology to Psychiatry

Professor Jarmo Hietala is an experienced psychiatrist who started his career in pharmacology before transferring to psychiatry. He is currently a professor and chairman in the Department of Psychiatry at the University of Turku and also holds an affiliated position as a chief psychiatrist in the Turku University Hospital. Jarmo originally built his research career in psychopharmacology in collaboration with Turku PET Centre and continued in psychiatry with his pioneering work in studying the neurobiology of psychotic disorders. His research group comprises devoted researchers, from students and early-stage researchers to post-docs and senior researchers.

An Active Career in Pharmacology Led to Psychiatry

After high school, Jarmo was hesitant between the technical university and medical school. He applied and got accepted to both, but his interest in studying the brain and mind encouraged him to choose medicine. During his first years in medical school, he studied pharmacology and specialized in psychopharmacology, in which he obtained his PhD in the late 1980s. For a significant period, Jarmo continued his career in pharmacology until he received his docentship in 1991.

“I started my career in the department of pharmacology, where I did my PhD studying the effects of antipsychotic drugs in experimental models. At that time in the late 1980s, clinical studies started in Turku University Hospital and PET Centre, including psychiatric studies. I participated in these early activities together with Professor Erkka Syvälahti and Docent Viljo Räkköläinen with studies in clinical and neurobiological factors in neuroleptic naïve patients with schizophrenia.”

Jarmo’s experience in psychopharmacology and later his cooperation with the PET Centre in their clinical studies that started in 1989 helped him to gradually shift to psychiatry. After returning from Stockholm, where he completed his post-doc at Karolinska Institute, he started his residency in psychiatry, and in the early 2000s, he was appointed the professor of psychiatry.

“I have had a multidisciplinary career, from my training in pharmacology and clinical pharmacology to research in psychiatry before I started my clinical work. This extensive earlier training was a great asset when I decided to be a psychiatrist because I already knew quite a bit about psychopharmacological treatments and then moved on to learning about psychosocial treatments as equally important in treating patients with psychiatric disorders”.

Meanwhile, Jarmo has been acting as the head of the psychiatry department at Turku University Hospital since 2012. He is also the leader of one of the major projects in the department on the etiology and treatment of psychotic disorders with a large group of researchers of different backgrounds.

“There are currently two main projects in the department of psychiatry; the FinnBrain project under the supervision of Professor Hasse Karlsson and my research project. I study the etiology and treatment of psychotic disorders in our group named VAMI, which stands for Vakavien Mielenterveyshäiriöiden etiologia ja hoito –tutkimusohjelma in Finnish.”

Challenges Facing the Field of Psychiatry in Finland

Psychiatry in Finland has been facing several challenges due to the shortage in the number of psychiatrists. This specialty has not been as attractive as it used to be to many students and has suffered for many years of students’ disinclination, preferring other areas of medicine. The shortage of clinicians has caused burdens on psychiatrists because of the heavy workload, and with the increasing number of retiring seniors, the need for more younger generations has risen.

On the other hands, psychiatric care in Turku in the early days was oriented largely on psychodynamic thinking; specialists were trained in psychotherapy and even psychoanalysis. Accordingly, the research was focused on psychosocial factors. Although this research line was important and developed clinical practice, it was relatively one-sided.

For these reasons, Jarmo worked with other members to boost the department’s activities by enhancing the training provided to the students and promoting research activities, all of which encouraged younger generations to specialize in psychiatry.

“For the past 30 years, we have worked on improving the research activities and training provided by the department as we wanted to create a more integrative view of psychiatric care and research combining neurobiological and psychosocial aspects. We strongly think that psychiatry is an important specialty of medicine, and it nowadays, together with primary health care, meets considerable challenges in treating the ever-increasing need for psychiatric treatments in society. Neuroscience and psychiatry are also now more integrated than ever in research to understand the interaction between brain activities and psychological factors.”

“It certainly looks a bit brighter now with a fair amount of new motivated residents in the specialization program.”

The need for qualified psychiatrists is not the only challenge facing the field; having specialists who are also involved in research is another problem. Clinician-researchers play vital roles in both the clinical and research work. They are the channels through which they can utilize their clinical work in research and translate the findings into their practice to ensure the ultimate effectiveness for the patients’ benefit.

“Teaching depends on the high-quality research performed by specialists who can understand the needs of their patients. Therefore, I was keen on working in the clinical field as well. We have been fortunate to receive significant external funding for our research on a more thorough understanding of the essence of psychiatric disorders, which is a requirement for developing new treatments in this field”.

Studying the Genetics of Psychosis

The primary focus of Jarmo’s research was to understand the mechanism behind psychosis and develop treatments for these disorders. One of these efforts is the Finnish SUPER study, aiming to study the clinical and genetic diversity in psychiatric disorders by collecting clinical data as well as blood samples from over 10,000 patients in Finland. This study was part of the International Stanley Global Neuropsychiatric Genomic Initiative launched in 2014 by the Broad Institute in Boston.

“We live in a global world where we collaborate in research to enhance our understanding of psychotic disorders. For example, our engagement with Broad institute in the psychosis genetic study called SUPER allowed us to study the clinical phenotypes in patients with psychiatric disorders possibly related to gene variants with major risk-increasing effects,” described Jarmo. The SUPER project will provide many high-profile biological and clinical research results and publications in the coming years. One example is the one reporting sleep characteristics in this patient population (DOI:10.1093/schizbullopen/sgac011).

Additionally, register studies have been one of the internationally competitive research fields at the heart of Finnish research activities. Combining various data to address several problems in larger populations is now possible. Jarmo’s research strategies utilize the Finnish population cohorts combined with neuroimaging and especially positron emission tomography (PET) to understand the mechanism of psychiatric disorders.

“Finland is a promising land for registers and observational studies. We can use genetic, clinical, and qualitative data from registered studies to answer one question. We were successful in this essence, and we collaborated with several researchers inside and outside Finland. However, register studies can sometimes encounter problems with the General Data Protection Regulation (GDPR) and other legislation due to the fear of data exploitation.”

Due to the significant role of psychotherapy in the treatment algorithm, Jarmo and Tarja Koffert started a psychotherapy research project, which is a multidisciplinary project combining quantitative and qualitative approaches. The methodology includes gathering patients’ opinions of the psychotherapy sessions they received and encouraging them to provide an overall evaluation of the effectiveness of these sessions in addressing their problems.

“When I started my career, I was more interested in biological treatments, especially as I started from the department of pharmacology. However, my clinical experience opened the door for me to check all the possible alternatives to treat psychiatric patients. It is better to combine the techniques to have a bigger picture, especially regarding the role of psychotherapy and how to improve the service. As such, we now collaborate with linguistic researchers to study how patients describe themselves and then to assess their usages of the terms.”

“I was a greater supporter of quantitative studies for understanding the brain, but later I started to understand the importance of qualitative approaches. However, combining these approaches is the ultimate method, so our methodologies ranged from getting patients’ perspectives to observing their behaviors.”

Starting with his clinical research at the Turku PET Centre, Jarmo has built a substantial research career that involved a broad collaboration on the national and international levels. The PET Centre’s early studies aimed at understanding the mechanism of brain imaging in humans through translational research, not to mention its international cooperation with other centers around the world, including departments of psychiatry in Karolinska Institute, King’s College London, Munich in Germany and Yale University as well as UCLA in the USA among others.

In addition to his profound work with the PET Centre, Jarmo collaborated nationally with researchers from different universities in Finland, mainly with several researchers from the University of Helsinki. In particular, there is a long-standing collaboration with psychiatrist and research professor Jaana Suvisaari (THL, Helsinki), with whom he has worked for over ten years on different projects, more recently on the immunological factors in certain types of psychosis (e.g., Transl Psychiatry. 2020 Mar 16;10(1):94. doi: 10.1038/s41398-020-0776-z).

There is also cooperation with psychology professor Iiris Hovatta in studying the genetics and neurobiology of anxiety, and professor Liisa Keltikangas-Järvinen, who created the psychology facet in the LASERI populations study starting in 1980 and now lead by Professor Olli Raitakari.

Internationally, Jarmo and his research group are involved in large clinical multi-center studies. They are participating in the Personalised Prognostic Tools for Early Psychosis Management (PRONIA) and Neuroimaging platform for characterisation of metabolic co-morbidities in psychotic disorders (METSY) projects with distinct partners including Germany, France, Sweden, Denmark, Spain, Italy, UK, and Australia.

Furthermore, a multi-center study is now beginning to start investigations on the role of cannabidiol as a potential treatment for psychotic disorders. This project has a coordination with the University of Oxford, UK, and funding from the Wellcome Trust. Cannabidiol (CBD) is a cannabinoid compound in the Cannabis sativa plant. Unlike tetrahydrocannabinol (THC), a psychoactive drug, cannabidiol lacks the THC psychotomimetic actions and has been used to treat some neurological disorders, such as multiple sclerosis. The rationale of this study is also boosted by PET imaging findings by Jarmo’s group, together with Kings’ College researchers. These studies have observed alterations in the cannabinoid 1 receptor (CB1R) in first-episode psychosis in vivo, which were linked to disease severity. JAMA Psychiatry. 2019 Oct 1;76(10):1074-1084. doi: 10.1001/jamapsychiatry.2019.1427.

“We create a multidimensional database that includes clinical, psychological, environmental, imaging, microbiological, immunological, genetics, and omics data. Then, we distribute and share this data with researchers from our networks. Having a heterogeneous group is useful because we can test our hypothesis using one sample and later replicate the procedures with different samples.”

“With the advancement of machine learning and AI techniques, we used our data to predict the outcomes with the help of German psychiatrist expert in machine learning, Nikolaos Koutsouleris. The results could assist clinicians in making treatment decisions for patients with psychotic disorders.”

Jarmo has always valued the importance of networking in his career. Adding to his extensive collaboration and involvement in major projects, he is also a member of several neuroimaging networks, such as the Executive Committee of the European College of Neuropsychopharmacology (ECNP) neuroimaging network that is part of the ECNP Networks initiative.

“Networking is now a necessity. However, finding the right ones takes time and effort. Neurocenter Finland could take the lead and create a platform for different parties to communicate and exchange their expertise in Finland and worldwide. Furthermore, this platform would open the door for interested institutions and companies to contact research groups for further cooperation.”